Note from Liz: I fell in love with Fiona’s stories about Marcello and think you will too. She really captures the essence of what it’s like to truly bond with a cat and appreciate all his unique qualities.

Any cat lover will know that all cats are truly amazing, each and every one of them having their own unique personality and attitude. They also know that the sadness of when it’s time to say goodbye can upset worlds.

Having experienced this often before, nothing had quite prepared me for the loss of Marcello, a true soul cat. The memories I have of him will stay with me forever, and sometimes I question if he was, in fact, a cat… or part human?

Marcello and Lily were a fostered brother and sister from a cat rescue. When I went to introduce myself at their foster family’s home, I immediately fell in love with Lily. She was Ms Perfect, everything I sought. So beautiful and affectionate, just what I needed (I’d thought)! Marcello, however, acted indifferent. And the foster parents informed me that in the short time he’d been welcomed, he’d managed to bully their very large animal family into submission, including a dog.

Marcello is quite a fellow

We sorted things out soon enough, and I don’t recall a moment when he wasn’t by my side at home.

He was as excited as I about the arrival of our weekly organic veg box. And throughout studying reflexology, when I struggled with anatomy, he lay upon all the sprawled-out books and papers on the floor, covering them from view and keeping me calm. If ever I was sad or upset, Marcello just knew and surrounded me with so much love and affection that his purrs changed to isp-like Hannibal Lecter sounds, which never failed to make me laugh and recover.

Marcello forewarned me about dubious men I thought had potential as suitable partners in love. Should they ever visit, he’d use his litter box tray, and remain in there scratching at the litter for what seemed like their entire visit. As soon as they left, he would instantly return to aloofly walking away from the litter box! Covering up nothing! Once, he even hissed (for the first time ever). I always put it down to an off day and didn’t heed his warnings. So deeply sorry Marcello, I did not listen and yes, okay, you were so right!

Marcello loved an early morning tea party in bed (as did Lily due to its location), and when it was eventually time to rise it was time to Salsa!With Salsa music I’d tidy up, doing all my domestic chores while dancing in between. He was so enthusiastic about this, prancing around my feet, feeling how happy I was, purring, and raising his front paws individually in a Mambo step (almost). So I did in fact have myself the most perfect partner.

He loved to display his body to demonstrate that he too had potential to become a portrait model. Draping himself often in the same pose as the nude portrait above my couch! (A dear gift from my amazing friend artist Michel Le Prince.)

Whenever Marcello was sleeping and I would speak, sing, or call his name, his tail would thump repeatedly on the wood flooring (isn’t that a dog thing?). 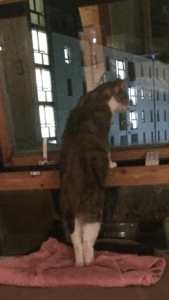 Twice he behaved exceedingly strangely. The first time, he went tearing around our home in fast motion. I thought he was trying to tell me to stop using the hairdryer. But later that day the police showed up to see if I’d heard or seen anything, as the neighbours on each side of me had been robbed…yikes!

Another time, he stood on his tip toes looking out my bedroom window as I was preparing for bed. Eventually I closed the window, removed the annoyed Marcello, and drew the curtains. Next morning, I find out that at that specific time a robbery was taking place in the downstairs yoga studio. Marcello had been on neighbourhood watch!

How lucky I was

My bed will never be the same to get into: with Marcello and Lily on either side, I would slide down the gap like a fireman down the shoot. I’ll never forget their formations when they did sleep close together– yin yang especially, and sometimes a loving heart.

As parents of fur babies will know, the loss of this amazing energy and presence is huge. When I reach the top of my tenement and hear silence, my heart longs for Marcello. The scratching behind my door as he had sensed my arrival is gone. The excitement to see what herbs, food, and flowers I’d bought has reached an end.

All my thoughts, sadness, and feelings of loss just emphasize now how lucky I was to have spent the years I was given with Marcello. I sense The Universe gifted me this beautiful, wise soul. I will always cherish my memories of him, even as they still leave me questioning if he was, in fact, a cat!

Fiona Cowie is a Clinical Reflexologist in Edinburgh, Scotland. She provides treatments to staff in The National Museum of Scotland, Historic Environment Scotland, and Edinburgh Castle.