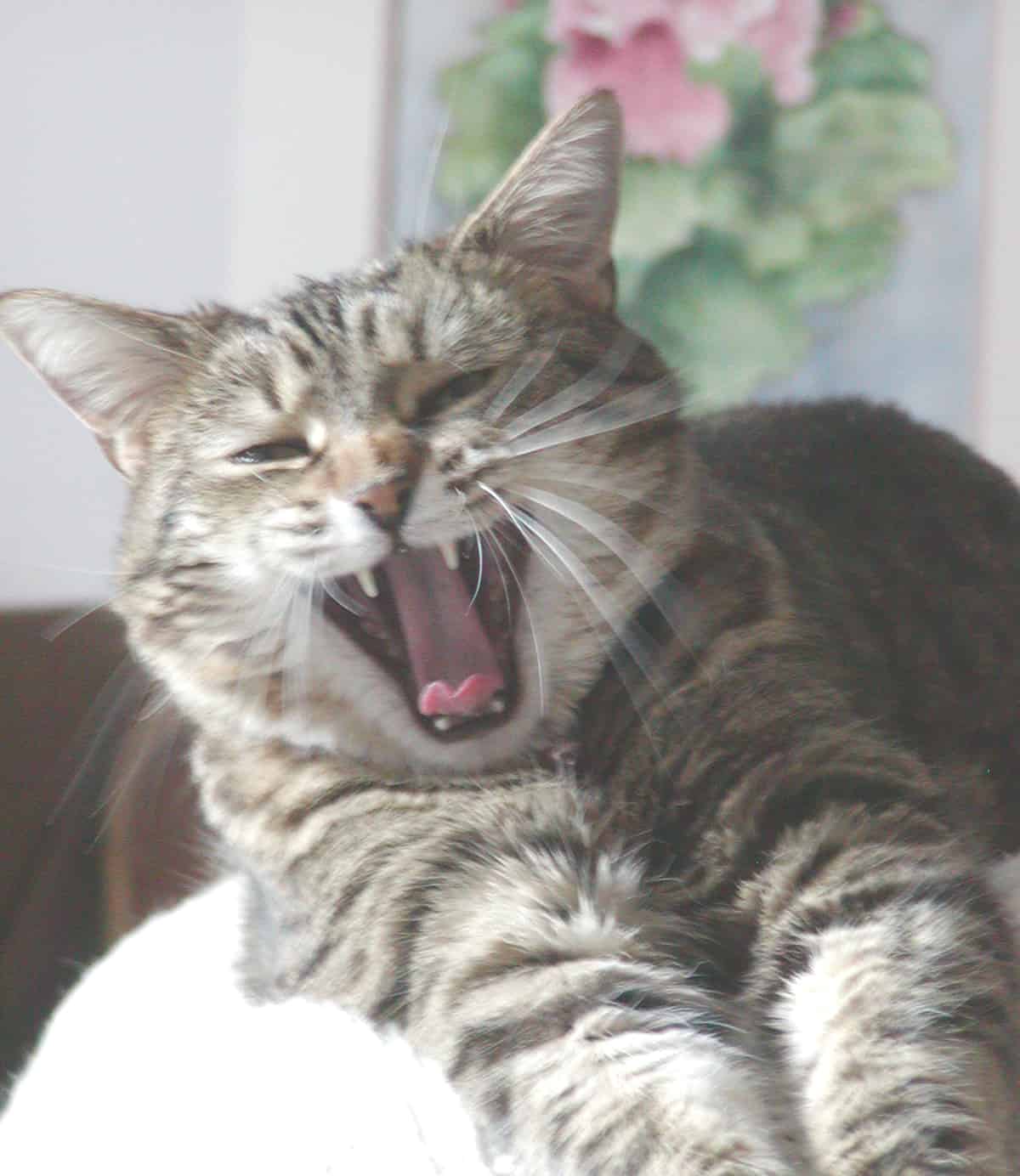 When I first brought Pyewacket, a 10-year old tortoiseshell cat, home from the local shelter, she wandered screaming through the house every night before bedtime. Four years later, she was still doing that—and meowing loudly when I come home, before and after using her litter box, and whenever I go near the kitchen.

Things I tried at first

I took her to three different vets. The first diagnosed gingivitis; we addressed that, and the screaming got worse. The second vet said it was feline senility and advised leaving a nightlight on, which had no effect. And the third said Pye was just naturally talkative.

None of which helped me deal with being assaulted, day and night, by screams. So I tried saying “no.” I tried talking in a soothing whisper. I tried cuddling, screaming back, and I tried water squirts from a spray bottle [Editor’s note from Liz: spray bottles are no longer recommended by cat behaviorists; like physical punishment, they make your cat trust you less, causing distress and making things worse.].

When none of the above worked and I caught myself wishing I could take her back to the shelter, I realized I had to get serious about solving this problem.

Things I discovered about cat vocalization

I started by scouring the Web, and discovered that my first mistake had been to lump all her noises into the catchall category of “screaming.” Cats hiss, growl, shriek, spit, chirp, purr, chatter, murmur, mew, meow, moan, and yowl—and all that vocalization is normal. Even increased vocalization is often normal: a cat may be noisier than usual when she’s hungry, in heat, grieving, lonely, bored, in a new home, or when there’s a strange cat outside.

With that in mind, I started noticing the sounds Pye made, and I soon realized that she purred, chirped, and meowed—all of which I welcomed. But there were two sounds that I wanted to discourage: “demand meows” and yowls.

Meows are something cats in the wild rarely do. Feral kittens meow to their mothers and stop once they grow up—but because domestic cats think of us as Mom, they continue to talk to us in kitten-ese. And when they want something urgently, they use a “demand meow,” which is rapid, repeated, and loud.

Pye also yowls, a sound that’s far more piercing and distressed than a demand meow. (To hear one, check this YouTube link in which a bored kitty tries to get her owner to play.) Yowling can have many causes: arthritis, dental disease, thyroid dysfunction, cancer, impaired sight or hearing, pain, hearing loss, anxiety, conflict, attention-seeking, grieving, mating, boredom, or cognitive decline.

That’s a scary list, so if your cat yowls—especially if she just started—you should take her for a complete exam. Before you panic though, bear in mind that, as per the University of California School of Veterinary Medicine Behavior Service, the most common cause of excessive vocalization is attention-seeking. There’s something the cat wants and she’s learned that vocalizing is the way to get it.

Changing that learned behavior isn’t easy though. When you try, a cat will vocalize louder and longer before she finally changes, and most owners will give up.

But I really wanted Pye to be a calmer, quieter cat, so after all my research and earlier failed attempts, this is the plan I came up with and followed:

Step One was to make an effort to be calm and quiet myself, to set a good example for her.

Step Two was to teach new behavior by not responding to the old. I ignored demand meows and yowls, because even yelling or shushing is a reward for bad behavior. (Physical punishment is an even bigger mistake, as it makes the cat afraid and stressed.)

Step Three was to reward Pye when she was quiet, using extra attention, pets, and praise.

Step Four was to give her a joint supplement—on the theory that her yowling, which mostly happens when she’s alone downstairs at night, might be due to arthritis that makes it painful to go up stairs.

That was my plan, my experiment. And how did it work, you ask?

As predicted by the experts, the noise got worse at first. And then it got worse. And then worse. Three weeks in, I wondered if any of the experts writing online articles had ever tested their theories on an actual cat.

[Editor’s note from Liz: In my (actual!) experience with the first three steps Rhiannon lists directly above, they do work with some cats. So they are worth a try. The joint supplement was also a good idea worth trying.]

Torties and the Power of Meow

So I did further research, and discovered that torties are generally agreed to be a sensitive, vocal, strong-willed breed. I was afraid Pye would always be anxiety-prone, noisy, and stubborn…but rather than give up, I decided to walk a mile on her paws. She was a true believer in the Power of Meow—and when that power suddenly stopped working, she felt helpless, confused, and terrified. She didn’t understand the lesson I was trying to teach, and she was trying what used to work as hard as she could.

I realized it was up to me, then, to communicate in ways she did understand. For example: when I come home from work, she’s half-hysterical from being alone all day. I therefore began to scoop her up and cuddle her until she calmed down. Then I set her down, and when she started her demand meows, I went to her (as often as necessary), gently held her head still and her mouth shut, looked into her eyes, and said “No” confidently. She doesn’t like having her head held, she knows what “no” means, and she’s smart enough to make the connection between those things and her meows. I then talked to her in a whisper as I made her dinner.

When I use that 3-part approach on coming home, she usually switches to sweet, excited mews that are much quieter and less frequent than her demand meows.

Her breakfast demands are harder to silence. I take the same approach, and while it doesn’t always work as well, the volume and frequency are much better than before I started my training efforts, and vastly better than what she did when I ignored her.

Her nighttime yowling has also improved. I don’t think the joint supplement helped; I think the root cause is that when she goes downstairs for a nap or a snack, she thinks I’ve left (because the house is quiet) and gets frightened. Ignoring her just makes her more afraid, so I respond with a firm “No.” Sometimes I have to repeat it a few times, but her yowl becomes a demand meow or two and then stops.

Now that I’ve found an approach that works with Pye, I think that she’ll continue to improve—though, given her breed and personality, Pye will probably always be a Loud Little Cat. It helps me to be patient when I remember what one commenter said about the YouTube video mentioned above: “As annoying as this can be, I would give almost anything to hear my cat yowl again.” My time with Pye is limited, so I try to love her well every day.

It also helps to remember that dogs have been living with humans for 40,000 years, while cats have only shared our homes for perhaps 10,000 years. They’re less domesticated. They remember what it was like to live by their wits—alone, free, and fierce—and I respect that. Pye and I had to find a working compromise on the issue of screaming, but I want to let my Wild Thing be as free as possible in my un-wild world.

[Editor’s note from Liz: Have you had a cat like this? What approach helped you and your cat live in more harmony?]

Cognitive Dysfunction: Does Your Cat Prowl the House at Night and Vocalize? This May Be Why – includes several holistic and supplement tips

12 Sounds Cats Make and What They Mean