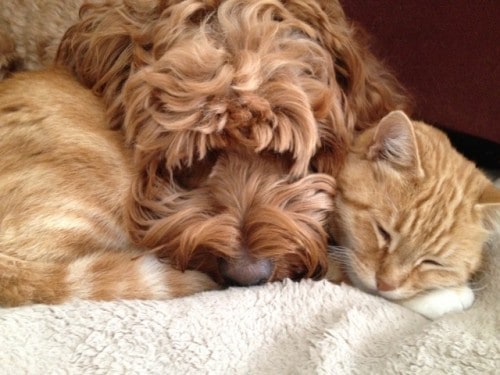 This DIDN’T happen overnight. Here’s how it went down…

Introduction from Liz: Many of us grew up with indoor-outdoor cats and dogs running around and found that these mixed families were fairly harmonious, or at least tolerant, as there was so much space for them to live virtually separate lives.

But, it’s a whole different situation when we live with a best-buddy indoor cat (or two) who is used to being the center of attention and has never lived with a dog, right? What happens when you want to bring a dog into a family like that? Rachel Katz learned a lot about this through introducing a dog to her family soul cat, Bodhi.

As you can see from the picture above, it all worked out eventually, but it didn’t start that way. The process was challenging, even with careful preparation. But the pay off of a happy family was BIG. Which is why I asked her to tell us what she learned – tell us everything!

Fated for a family

The journey began with a humble prayer. “G-d… please let our cat and dog not only tolerate each other, but grow to love one another.”

As I wrote in Fated for a Feline, living with – let alone worshiping – a cat was something I never expected, but I fell deeply in love with a cat named Bodhi. So when my significant other, Andy, and I decided to move forward with our long-delayed plan to get a canine, my obsession with finding the perfect fit for our sweet, gentle kitty overrode all else.

After much discussion (and more than a dollop of self-imposed guilt), Andy and I concluded that despite the fact that we wanted another rescue, we were unwilling to gamble with the tangle of unknowns and would, instead, go with a dog breeder.

From then on, it was a dog research marathon. For months we scoured the net for breed information and spoke with friends, colleagues and dog owners in the neighborhood park. Most importantly, we wanted to know which breeds were best suited for a cat. The only breed we were warned to avoid was terrier. One in particular hijacked our hearts- the labradoodle. They were impossibly adorable, possessed exceptionally sweet temperaments, uber smart, easily trainable, and seemed a good fit.

With that in mind, we set up an appointment with our vet to discuss how best to welcome a labradoodle into a cat-owned household. We had many questions. Like, what age is the best fit? We were told there are advantages and disadvantages to getting a puppy. The puppy’s high energy could be a bit much for a cat, but a puppy will “know its place,” whereas an older dog might not be so understanding. Andy and I hadn’t considered an older dog because we always wanted a puppy, but if the vet had said that an older dog would be better for Bodhi, we would have gone with that despite our preference.

We also wanted to know if they should sleep and eat in separate rooms at first. The answer was yes.

Should a cat door to our enclosed urban garden be installed as an escape route? Our vet said that was another good idea – cats need to feel safe by always having a dog-free space they can go to. What behavior changes – if any – should we look out for? She said that, although a labradoodle was a wise choice because of its generally sweet nature, there were still no guarantees that he wouldn’t demonstrate aggression towards a cat. “Prey drive will play the biggest part in domestic harmony and breed type is often a poor predictor of this trait.”

We also contacted Bodhi’s acupuncturist, who was treating him for benign eye tumors. Would the stress of a new dog exacerbate his condition? No, but she cautioned us to always feed Bodhi first. “He is the alpha and needs to know he is #1.”

I even consulted with an animal communicator who enthusiastically gave her blessing to an opposite species union.

We attended several Bay Area Doodle romps to find out which breeders had the best reputations and experience socializing puppies with cats. As luck would have it, we found one who had both.

Rolling the dice, we put down a deposit and soon after welcomed Charlie – a sparkly-eyed, sloppy pawed, exceptionally exuberant 10 week-old who we promptly nicknamed “The Joy Monster” because of his irresistible ability to put a smile on just about anybody’s face.

Although our new puppy, Charlie, seemed to quickly adapt to his forever home, Bodhi was miserable. After a week, he disappeared into the garage where he would hide for hours, no longer snuggled in our bed, and avoided being in the same room as Charlie. And the worst? Finding him in the bathtub soaked in a pool of blood-streaked urine – the result of a stress-related urinary tract infection.

Devastated, I called my dear friend Betty sobbing. “We’ve made an epic mistake bringing a puppy into the fold!” Not only did we put Bodhi’s health at risk, but we had disrupted the peaceful, affection-drenched environment that our once-abandoned rescue had come to relish over the last three years. We also made the mistake common to many parents focused on a newborn – not paying enough attention to the other sibling.

It seemed as if there was only one solution to right this wrong. We would have to give Charlie up.

Betty listened with her customary compassion. “Give it time,” she gently whispered. “You have done so much to try to create a harmonious situation. Trust that it will work out.”

Trust that it will work out. This was my new mantra.

Committed to maintaining a tranquil, anxiety-free atmosphere, Andy and I attended puppy training classes with Charlie, exercised him daily, showered both our animals equally with lap time, and refrained from raising our voices (except when uttering the command “Gentle!” to stop Charlie from barking, whining, and paw-poking Bodhi.)

Slowly but surely, it all pays off

Slowly over the next few months we started noticing subtle shifts; Bodhi would spend more time upstairs than in the garage, lie on the family room carpet while Charlie sat on the couch with us watching TV, and brush his tail, albeit once in while, against Charlie’s ear.

As time went by, they seemed to interact more like siblings; jumping into each other’s beds, drinking from the same water bowl, chasing each other around the house, grooming one another and waiting side by side to greet us when we arrived home.

We created rituals to further facilitate connection. Treat Time consisted of Andy feeding a customized late-night snack to our furries – Bodhi first. This was followed by Family Time, when he would carry Bodhi upstairs to bed and gently drop him onto my chest. Andy would then settle underneath his sliver of covers and within seconds, Charlie would sprint up the stairs, jump on the bed and plop in-between our feet, completing our group snuggle before drifting off to sleep.

Many believe that Andy and I are largely responsible for Bodhi and Charlie’s connection and to some extent that may be true. However, nature vs. nurture is a curious thing. I don’t think we will ever truly know how much of each (including plain old luck) played a part in the successful outcome.

But I do know this:

And that, despite his discomfort, it was my cat Bodhi’s steadiness, patience, and generosity that allowed the relationship to blossom.

And that my prayer was heard.