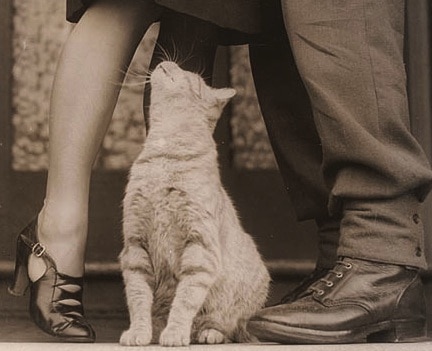 Do you have cat “love story”?

Has a cat ever played a helpful role in your relationship with your sweetheart?

One evening after Robert and I had an argument, I retreated to a room to be alone with my misery.

A vigorous meowing and pushing started on the door.

Our cat Phil managed to push the door open and then he jumped up on the bed, curled next to me, and purred with lots of big blinky eye contact.

Many people have experienced the joy of cats coming to comfort them when they are upset, but even stranger in this case was that:

Now, I don’t want to imply that Phil was taking my side in the fight here (or do I?!), but he certainly wanted to help me feel better and he succeeded. Robert was touched by seeing Phil do this too, and it ended up diffusing the tension in the house.

I don’t even remember what the fight was about, but I’ll never forget Phil’s behavior. And you know, it happened many months later after another argument too.

It’s almost like Phil wants to make sure Robert and I stay together.

Unlike dogs, cats are still more wild and don’t need us as much to survive.

So when they really connect to us and show us they care it’s more surprising and can feel quite meaningful.

When a cat comes to me and purrs when I’m sad, or runs to meet me at the door (even though they already have food in their dish!), I sometimes think “where does all this love come from?” It’s a beautiful mystery.

I have adored many dogs, but I love the snuggling and the petting, the intimacy, you can have with cat.

A cat will open to you with unexpected intelligence, play (like fetch), and understanding that can blow your mind, but only if you first open your heart and mind to them and let the trust build.

When we are open to being surprised by them, we will be.

If we don’t think of them as equals and friends, and if we assume they are just selfish or scared creatures, they will often appear to reflect that back to us. But they give us more than we can imagine if we allow them too. That’s my experience.

Here’s an example just shared in the Comments on our last post. The blogger Us4Cats has a very animated gentleman cat who gives hugs:

Our mancat, Stripes – he is a gentleman indeed. whenever i sit down next to him he automatically stands up and waits until i am seated. he waits patiently for the three girl kitties to eat as he stands in line letting them go first. every time i pick him up or gesture toward him he squeeks at me. and the best is he actually hugs! he jumps to his spot on the kitchen table and raises his arm which resembles a wave. it is his way of calling me over to the table. i approach and stand straight and tap my chest and he stands up on his back feet , reaches all the way up to my collar bone and hugs me! every time. and he squeeks while doing so he is such a cuddle bug.

The refrigerator is next to the kitchen table; if my back is turned he will position himself at the tables edge, reach over, and tap me on the back. i turn around and he will talk and talk. and the same goes for when we are sitting side by side; he will tap me on the shoulder with his paw to talk to me. and then squeek. he does this sweet move first and shyly stretches his forearms before he taps my shoulders…he’s such a gentleman!

Do you have a cat love story too?