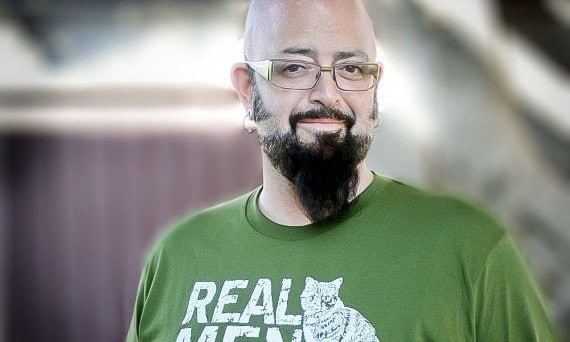 But, Jackson was so gracious and down-to-earth that I found myself caught up in a conversation I didn’t want to end.

I wish you could have joined in. Let me try to share all the best parts with you, starting with male cat converts, secrets for bonding with cats, and Jackson’s bond with his own “teacher cat.”

I tell Jackson that one of my favorite things on his show is when there’s a ‘cat convert,’ such as a boyfriend who didn’t like cats, and they begin to see the cat in a new way and they start bonding.

I ask him if he had any thoughts on how that occurs and how we can make it happen more.

It turns out he is passionate about this topic, especially about men becoming cat converts.

Jackson acknowledges that men in general started off on the wrong foot with cats because most men like to feel in control and cats don’t like to be controlled.

Yet it’s clear to him that men and cats go together and that something changes when men understand more about cats.

Jackson: “The whole notion that dogs are more masculine is interesting, but silly…because men, historically, we like to flex territorial muscles. You know what I mean, control. …There’s nothing more masculine than a cat if you ask me…. Actually having a reminder of what’s wild in your home is masculine.”

Liz: “I see that… cats don’t wanna be controlled and they are territorial, and a lot of men probably identify with that.”

Jackson: “Right. Oh my god it’s like a freaking term paper I could write on this! You know, not in any way scholarly [he laughs]…

And it symbolizes that exactly – what you just said – and we just have to take that one step further and bring a cat into your life and  –  the class I teach around the country is called Cat Mojo, and Cat Mojo 101 is how your cat sees the world and how the raw cat sees the world – and if you get into that, you will be psyched to have a cat. I have no doubt about that.”

Jackson says he has a history of working in a high kill shelter and he feels that we are in a unique position in animal welfare history to end the need for shelter killing. He feels that helping people, especially men, understand and bond with cats is a big piece of the puzzle.

How to bond with a cat

Liz: “If someone is new to having a cat or being with a cat and they want to know how to bond with the cat, what would be a few things you would tell them?”

Jackson: “Bonding with a cat, again, it’s [understanding] cat mojo, what turns pretty much every cat on. And at the core of their being, they’re a hunter and if you hook into the game…meeting them on their side of the fence where play and prey, where you assist them in [play] ‘killing’ something so that their self confidence is in a place where it was always meant to be…. you’re now their hero and that level of bonding is where I’d start.

See the world the way a cat sees the world and that’s where the bond starts.

Also, resist the temptation to assert yourself. To put the cat on your lap, to cart them around from place to place. They’re creatures of self-determination.

When you create that bond it happens in a very energetic way…when you lay the foundation of that bond they will come to you.

There’s no point in trying to make a cat do anything. Don’t make them do anything. It’s …you’re stepping on one end of the toothpaste and hoping it doesn’t come out the other end you know. Bad stuff happens.

Just ‘build it and they will come.’ And yeah, that’s easy stuff.”

Liz: That’s so great, but of course, it’s so opposite to what people who are used to dogs will do.

Why bonding with a cat is particularly satisfying

Jackson: “The great thing about being an animal person is if it’s about what you want, then hang with a dog for a while, because just in terms of their evolution, they’re about making us happy. Sorry, I mean it’s very simplistic, but we have evolved them to do jobs for us. So that’s the story of dog. But a cat is not that story.”

Jackson: “Yeah it’s very likely. That’s really well put. Because that’s the satisfaction. The satisfaction of ‘you build it and they will come’ is immense…”

He goes on to explain that working with cats and their guardians involves a lot of character study and story for him, leveraging his background as an actor and writer. He strings clues together into a story that helps him devise a better life for everyone in the house. He concludes, “I know that’s wholly unscientific, but it’s served me terribly well.”

Jackson: “Right, thank you…working with cats is art, and it’s science peppered in, of course, and that’s why… I was mentored by a cat vet. Dr. Hofve, the vet that mentored me, she taught me about the machine and I taught her about the ghost inside the machine, that was our deal.”

I ask Jackson if he’s ever had a cat with whom he felt an unusually strong, inseparable bond, as we talk about “soul cats” a lot here.

Jackson emphasizes that he tries not to play favorites, but he does admit to a special, touching friendship with what I would call a soul cat. He’s about to publish a book about this cat.

Jackson: “Well, I mean, Benny was definitely one of them…. I don’t play favorites. I love my cats. I love other people’s cats. I love cats… But yeah, Benny, because Benny was such a teacher and because his story was so archetypically shelter cat, you know.

He always hit me hard… I think the thing about Benny was that it’s a story of co-healing.

Jackson makes me laugh as he explains:
“My book is about my life with my cat teacher Benny. Everyday it was like – what movie does it remind me of? It reminds me of Kill Bill… where Uma Thurman has that incredible task master teacher, kung fu teacher, and every time she would pick up a grain of rice a certain way he’d slap her hand.

Benny was like that for me. Cause you know every time I thought I had him figured out he would just you know, flip me the bird and I’d have to start again…

It helped me to be able to take knowledge to larger groups of cats but then I’d go back to him and he’d just start all over again.”

NEXT, in Part 2, find out Jackson’s views on some controversial cat behavior topics: mood meds for cats, cats-per-square-foot, and you!

Jackson’s cat behaviorist show, My Cat from Hell, is excellent and just started its second season, Saturday evenings on AnimalPlanet in the US. Showing in other countries on Animal Planet soon as well.