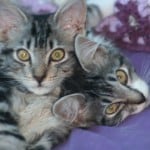 This post is part of an ongoing series about real-life feline healing stories with a natural or integrative approach. Let’s learn and gain inspiration from the stories we don’t always hear. (If you have one to share too, just send me a quick note here!)

Deanna Smith of our blog community is an illustrator, acupressure expert, and animal lover with a cat healing story to tell.

For many years she self-studied acupressure, the ancient forerunner to acupuncture, and has found it very helpful with her animals.

She uses acupressure in cooperation with her veterinarian, who is quoted on the back of her book:“Working together I feel we have made significant improvements in the quality of numerous pets lives.” He recommends that vets try laser therapy on acupoints, and adds “you won’t be disappointed.”

The book Four Paws, Four Directions is Deanna’s favorite comprehensive explanation of Chinese medicine for animals, but she needed an illustrated acupressure book with quick ailment look-up charts that she could refer to more easily.

After a number of years of creating these charts and illustrations for herself, she finally create a book out of them. It covers cats, dogs, iguanas, parrots, ferrets, guinea pigs, and rabbits.

I found two kittens, Xylo and her brother Kazoo, in the yard by my feed barn in the late afternoon.

It was June, and in Arizona the temperature can climb to over 100⁰F in the sun.

Both still had their umbilical cords with the placenta attached, but there was no mother in sight.

I had no idea how long they had been out in the open sun, but both were crying and panting. I moved them to the shade and waited to see if the feral mother would come back for them.

I bought some kitten formula in case she didn’t come back for them. When I got back with the formula, the mother hadn’t come back, so I took them inside and fed them.

I took them both to my veterinarian the next morning, he removed the placentas and checked them out. Xylo was doing well, but because of the trauma Kazoo didn’t make it.

Xylo improved, had her shots, and got spayed at four months old.

She stops eating one day

When she was five months old, I noticed one evening that she looked at dinner but didn’t eat.

She did the same thing the next morning, so we took a trip to the vet.

Xylo was acting normally, all her vitals checked out, and she had no fever. They couldn’t find anything wrong with her, so I took her home.

But she still wouldn’t eat, and the next morning she was very listless so I took her back to the vet.

They put her on fluids and decided to run the blood work. I left her there for the day. When I came back in the afternoon, they still couldn’t figure out what was wrong with her.

Missing white blood cells and out of options

The only thing strange in her blood work was that she had no white blood cells. White blood cells fight infection, so they are usually elevated when there is an infection.

They didn’t know what else to do for her, but told me to bring her back in the morning for more fluids if she made it through the night.

Subcutaneous fluids and an acupuncture book

I took her home with subcutaneous fluids to give her overnight and pulled out my acupuncture book.

I looked up white bloods cells and found an acupoint that helps create them.

I started, as always, with the opening massage to stimulate the movement of Qi, then I applied gentle pressure to the point.

Xylo was very weak and got progressively worse; she was restless, and would try to walk but each time she collapsed in a heap.

I repeated the treatment about every half hour because I was afraid she wasn’t going to make it.

Then she started to cry and walked into things; I wasn’t sure if she could see anymore. I made a bed for myself on the floor so I could lay down with her, where if she got up she wouldn’t hurt herself.

I kept repeating the treatment, though it didn’t appear to be helping.

She finally laid down with me and went to sleep at about 3:00 a.m., and I didn’t know if she was going to wake up.

I laid there with her sending healing energy without acupressure until I fell asleep. I slept a few hours and woke up and Xylo wasn’t there with me.

I found her in the kitchen eating, and she looked normal. I was so excited and relieved that she was all right. I gave her more to eat until she was full.

It was Saturday, so I took my time getting her back to the vet to get another dose of fluids. I wasn’t sure if she even needed them now that she looked so good.

Little Xylo goes back to the vet

When I saw the doctor, he said they thought she hadn’t made it when I wasn’t there when they opened.

I told him what I had done with acupressure, and he was amazed at her recovery.

When the remaining blood tests came back they still didn’t show anything, and I never discovered what was wrong with her.

The doctor suspects her lack of colostrum from her mother’s milk may have given her a weaker immune system, but the illness is still a mystery.

Without acupressure to fix her deficiency of white blood cells, Xylo would not have survived her mystery illness.

After that I had the doctor explain everything on the blood work to me, so I could correlate it to the acupoints and be able to balance the readings.

I hope Xylo’s story will inspire others to use acupressure to help care for their pets. I put together my book, Animal Acupressure Illustrated volume 1 Small Animals, to help make acupressure more accessible to everyone who wants to use it.

Deanna said cats are easy to do acupressure on. The pressure you apply is light and only about 30 seconds per point.

She said, “If your cat will sit with you for 3 minutes you can do a treatment. They seem to know you are helping them.”

Deanna has Facebook page for the book and will answer any questions anyone has about acupressure for animals there!