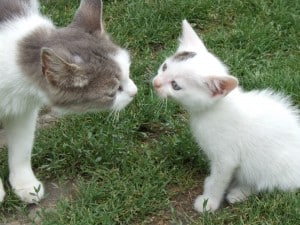 Welcome to another interview with Mikel and Dilara of Feline Minds!

Wait, don’t give up on one cat because your other cat seems to hate him.

There may be hope.

I’ve struggled with this problem myself, and others have asked about it, so I am very grateful to Mikel and Dilara for sharing their wisdom on the topic. I will definitely be using their advice next time.

Here’s how they answered my questions…

When someone has two cats who hiss and fight, what are the first couple things to try?

“The first thing to do is keep the cats separated and give them a break from each other:

The second thing to do is a slow (re)introduction based on positive experiences, so that means letting the cats experience the other sense by sense, safely and paired with a favorite treat (such as tuna):

The important thing is to wait until both cats are comfortable and curious before going to the next step.”

Do you have a couple tips for preventing this problem before it ever starts?

“Our mantra – a slow introduction!

It can be very frustrating to live in a home where you have to do a slow introduction and keep doors closed, but preventing bad encounters will pay off in the long run.

This seems like a particularly tough one to me–is it harder than most behavior problems?

“Sometimes it feels like it! One important factor is how compatible the cats are – old cats and teens don’t always mix well, for example.

Some cats are just more tolerant of other cats, or have had more exposure to cats during their sensitive socialization period.

Others seem to be more territorial. Cats by nature are solitary hunters, so it is possible that they haven’t had to evolve a complex social structure where they ‘need’ to cooperate. In the wild, cats tend to congregate over resources (mainly food).

One big issue is that often by the time you try to fix this problem, the cats have already had several bad encounters. A study by Levine, Perry, Scarlett & Houpt in 2005 found that initial meetings between cats that involved fighting were highly associated with continued fighting up to 12 months later. This demonstrates that a bad introduction can make the problem much harder to solve down the line.

However, they also found that 40% of cat owners in the survey reported their cats were co-existing peacefully within a month.”

CET Oral Hygeine Chews (treats) – Phil and Joel’s new favorite wholesome cat treats (but the occasional bit of tuna works well too!)
Feline Minds Consulting offers cat behavior consultations that include an extensive interview, immediate advice, a written treatment plan, and follow up phone calls or emails. Rates at the time  of this post:
Reach them @ info@felineminds.com or 510-619-9567