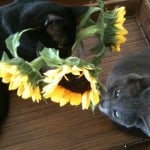 It’s all well and good to have flowers that are safe for cats to nibble, but what happens too often with our cats is the vase gets tipped over in flower frenzy excitement. Water everywhere.

I actually was about to commission someone to build a cat-safe un-tippable vase, but then a friend on Facebook pitched a much easier idea:

Here I am in San Francisco, California, and I’d never heard of this stuff.

Well, I’ve got good news, friends. It’s working! Allow me to demonstrate with sunflowers we bought at the Farmer’s market over the weekend.

Here’s what I did

1. I bought (super cheap) “Quake Hold” Museum Putty and followed the instructions to roll pieces of it into little balls, place vase on them, press down, and make a slight twisting motion with the vase for “suction.”

2. Added the water and the sunflowers. Phil and Joel  immediately showed up on the scene.

3. Two days later the flowers and vase are intact! No tip overs, no drama. A few green leaves have been chewed, but otherwise all is well.

And that’s when I had the nerve to ask Robert to do the tilt demonstration for me.

What a relief to be able to have flowers at cat-level more often. Hooray!

There are other brands available, but this one seemed the most popular for the best value on Amazon.

P.S. Yes, it works with many surfaces (e.g., glass, wood) and is removeable.

How about your cats?

Can they tip over a putty-secured vase? How do flowers work in your house?