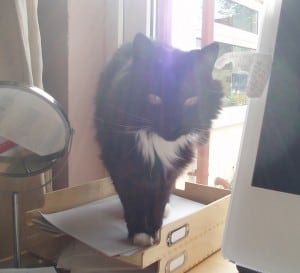 As you can see in the photo, Moses is very special. I was quite moved by what Charlie wrote about her on the feline soul mate post page.

…I think cat soul mates come into our lives to teach us something. The time they have to go is the time they have to go. It’s not for us to argue with it. I am truly blessed to have had her in my life and….I console myself with the belief that I will meet Moses again one day and I still feel the connection very strongly. I don’t think of her as dead but that it was her life and it was time for her next part of the journey….

On the day that she died both my boyfriend and I saw her in the shadows on separate occasions. She was in the spot where she had last sat in the garden and watched him dig her grave.

When he had finished I went to her grave and I saw her. When I told my boyfriend he said he had seen her too but hadn’t been sure whether or not to tell me.

Here’s the story of Charlie’s unexpected connection with Moses.

1. How did you find each other?

Moses came for a holiday but did not appreciate returning “home.”  She wasn’t eating properly or washing herself, she would not leave my boyfriend’s bed–she was desperately unhappy.

It was decided she had to be returned to me. The minute she was let out of her box in my house she was purring, rubbing against the furniture and completely back to her old self.

She was in her retirement, so it was time to kick back and relax and be showered with love and affection. Moses loved people and she loved me most of all.

2. Is there a personality trait or experience that stands out?

To be honest, every day was pretty much the same, but those two years stand out for me. Moses was full of character and communicated everything with her eyes. You always pretty much knew how she was feeling and she expressed a whole range of emotions—content, happy, annoyed, angry, jealousy, resentment.

Though she was an old cat she mostly behaved more like a kitten.

3. What made you aware of your special bond?

I had met her before she moved in and had not taken a great deal of notice of her. After she lived here for one day though I immediately fell in love with her.

She had belonged to my boyfriend’s parents before she lived with me. When he called me to ask how we were getting along, my reply was that she was “amazing.” It hadn’t even been 24 hours.

That is how I continued to feel about her for two years.

I have a very active social life, but sometimes I might even return home early from a night out just so I could be with Moses.

I really never had been so gushing about a cat. Moses was the best though.