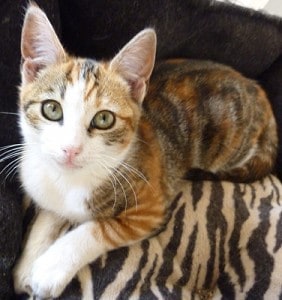 When I heard about Bee Holistic Cat Rescue and Care, in a neighboring town, I couldn’t wait to interview the owner, Cynthia.  We had a good talk last week.

Cynthia took it upon herself to start a cat rescue “twenty-some years ago” when she saw neglected cats around her office.  Over the years, her rescue effort grew and became more natural and holistically focused.

She doesn’t do holistic just half-way. She take a strong position on some controversial cat care issues. Many of us who already have cats, or who have very busy schedules, may not be able to put all she advocates into practice.

But read on, as Cynthia provides good food for thought, as well as tips and an inspiring story.

P.S. She asked me to tell you that she has found that giving good food is easier and less expensive–by far–than having a sick cat. She contrasts this to the “the conventional Western medicine approach of quick fixes that suppress the symptoms–where the problem then becomes chronic and more widely spread throughout the system.”

Liz: Cynthia, I’m excited to be able to talk to you. What’s your favorite thing about this work?

Cynthia: Seeing sick, debilitated cats bounce back to vibrant health, often within two weeks or so, simply through use of a good diet.

My friend is overwhelmed. You know, she’s down for days with migraines and she had a cat who had been left behind when his guardian moved into an apartment where she couldn’t take pets. You know, you just can’t say no.  And so she winds up with this lady’s five cats! Quinn was one of them.

He was four years old and had been outdoors all his life at her home. He had never had much attention. He was not doing well, so she brought him over to me.

When he got here, he was almost in a fetal position. His eyes were downcast and half closed. Both his front legs, and part of his back legs were wet from drool. He had a tumor in his mouth. Not a typical canker sore tumor. It was some sort of a cancerous tumor.

And, his coat was terrible. And he had a claw that had grown into one of his pads. He had lice. Let me think…anything else?

He was a wreck, and the short version is that within a month he looked like an entirely new cat, psychologically and physically.

For the lice I did use a topical poison because I don’t know any better way, and it’s urgent. And lice are very pernicious, although my cats probably wouldn’t have gotten them.

I just fed him really well. I gave him what he would eat, which was mostly sardines. Tiki Cat can of sardines, lots of sodium…but it’s relatively good.  If your going to get canned food it’s one of the best.

Then I slowly started switching him over to more and more organic until he was eating entirely organic with some enhancements (like fish flakes) to coax him over to the new food. Every day he was better, noticeably better.

His coat became soft and the stains on his arms and legs diminished. And he quit drooling.

My friend came to visit often. He loved her very much and was happy to see her. And I loved him too, so with us both encouraging him, he came out of his shell.  He turned into a happy, healthy being…

Dear Quinn–he’s on my website, too, on my blog.

After he was well, he went back to my friend’s house. He’s more comfortable there, and can always come back here if he needs to.

Liz: Wow, that’s a great story.  What about the tumor?

Cynthia: My friend is working on it. You can’t give him anything topically of course, at least not anything I know of. But I’d been giving him internal neoplasene—about a milliliter a day. The dosage is “to tolerance”. In other words, give as much as they can take without getting diarrhea or vomiting. I didn’t press it. The tumor started to break up. She’s continued to give it to him at home and I hope she’s regular with it.

Liz:  Can you highlight a few things you do differently than regular cat rescues?

Liz: What converted you to the holistic approach?

Cynthia: I do a lot of reading, and I have a curious mind. There’s just vast amounts of information indicating that a lot of the mainstream protocols are dangerous.

And of course a good dose of common sense is always appropriate. For instance, if you put a pesticide on an animal—gee, you know, that might not be a good idea.

…it’s very common, in shelter and other practice these days, to do premature spay and neuter before the cats systems are developed, at six months or older. But I think most people would instinctively say, “that’s not a real good idea,” if you wanted to do it to prepubescent human, right?

Liz: I see–because their hormones and systems haven’t finished developing.

Cynthia: And I learned about industrial farming practices and how damaging the food that results from them is, in addition to the terrible cruelty…and so on.

And I was fortunate to meet a really good holistic practitioner in Oakland, Dr. Jenny Taylor of Creature Comfort Holistic Veterinary Center.

Many people are–for whatever reason—trusting in the status quo. I follow teachers I have come to trust, and my own experience.

Liz: That’s how I got into holistic health–way back. It was for my own health. I was trusting conventional practitioners who turned out to be really wrong. And I had to figure it out myself.

In a few days I’ll post Part 2, where Cynthia talks in more detail about how she feeds her cats and about keeping the right perspective when times get tough, plus some final words of wisdom.

Cynthia invites you to visit her site and even to call her if you have questions about holistic cat care!

All photos in this series are courtesy Bee Holistic Cat Rescue.