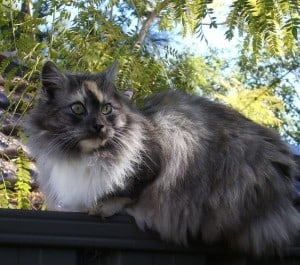 Momo is a luxuriously furred cat and loving feline soul mate to the charming cat blogger known as “SS.”

Actually, it’s Momo who writes the blog, but SS is her human companion who attempts to supervise the whole thing.

I like how SS points out that cats who are not “lap cats” are still sometimes the most loyal and loving cats. Here’s my online soul-cat interview with SS…

1. How did you find each other?

Momo was a stray who came to my sister-in-law’s house day after day, mieowing for food and would not leave after the feed.

My sister-in-law has a rather territorial tomcat and a big rather unfriendly large Alastian. So she couldn’t adopt Momo at the time.  She scoured the neighbourhood to see if Momo belonged to anyone because she looked tame and well cared for.

No one claimed her. Our little dog has passed away some time ago and we decided to adopt her.  This was in 1998.

Shortly after she came, we noticed that she was getting rounded.  She was pregnant!  Soon she gave birth to a boy and a girl.  We thought that she might have been abandoned by her previous owner because of this.

2. Is there a personality trait or experience that stands out about Momo?

Momo is a home-body kitty.  She would not venture beyond the front garden wall even when let loose and always responds when called.

3. What made you aware of your special bond?

Momo is very aware whenever I am under stress.  She is not a lap cat but would be extra close during that time.

She was my study pal during my years of doctoral study and kept me company through long nights in my garden-shed-converted study in the back garden.

It was during this time that I started a blog for Momo, as a kind of relief from study.  Her blog is http://momoandco.blogspot.com

At first the only visitor was a fellow doctoral student who also had a dog blog.  Then, a member from the Cat Blogosphere discovered our blog and introduced us to this very supportive community.  (We are still part of it, although not quite as active as we would like due to work commitment.)