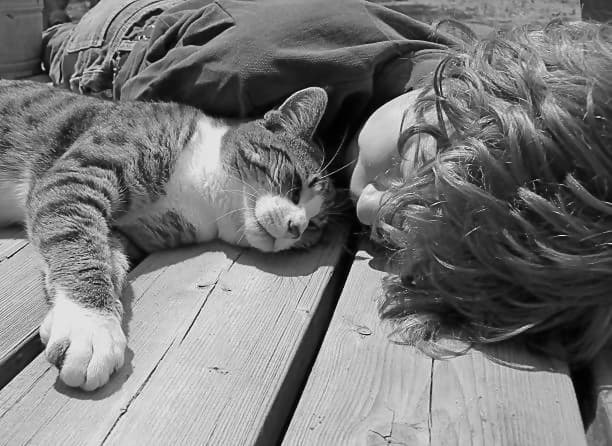 I think most cat lovers sense the meaning of  “feline soul mate” right away, but these feelings come from a wordless place.

These feelings dwell in right side of our brain, where words don’t happen naturally.

“One who is perfectly suited to another in temperament”

“Someone with whom one has a special, almost spiritual connection”

What does this experience look like? A few specific traits come to mind. Let me know if you can relate to any of them.

A soul mate cat picks you out

Technically, you might say you went to the shelter and picked him out. Yet, why did you pick him? Because it was clear he wanted to be with you and you found him irresistible, right? He’s usually the cat or kitten who most comes alive when you appear.

Or, your feline friend might have just found their way into your life and it was love at first site. Sharon Callahan’s soul-mate cat Lily was part of a feral family downstairs from her flat. This wee little wild kitten took it upon herself to leave her family and venture all the way up the stairs to Sharon’s door. Lily decided she was not leaving, so she and Sharon proceeded to take care of each other for the full 25 (!) years of Lily’s life.

No matter how you find each other, there’s a sense that it’s meant to be–synchronicity.

They are more effective than a suicide hotline.

Cats who are soul companions are particularly tuned to your feelings, and an inseparable bond forms between you. They may look alarmed, or try to comfort you, when you are upset or ill. I shared some examples of this in Stories of Caring Cats.

Here’s another example. There was a moment several years ago when I was deeply depressed, crying, and seriously thinking–for the first time–of how I should end my life. Suddenly I saw that my cat Bastet had planted herself in front of me with the biggest, most concerned eyes I had ever seen.

I realized that I could never leave her. Frankly, I couldn’t bear that look on her face. I actually assured her out loud that I was going to be okay and that this would pass. I was committed to her. After all, she was in my care and she was a soul mate. Bastet was more effective than a suicide hotline at that very low point in my life.

I’m talking about the kind of thing that we don’t tend to say much about because it just doesn’t fit how the world is supposed to work.

Rupert Sheldrake, Ph.D., is a scientist who has studied dogs and cats who know when their person is coming home–even when they are arriving at a random, unplanned time in a different car or by foot. The animal gets up and goes to stand at a window or door about 15 minutes before the person arrives. He says this phenomenon only seems to happen with animals and people who are very closely bonded.

You might have an instance like that, where your cat seems to be able to read your mind.

Or maybe your cat had a survival miracle. The little black kitten I adopted when I was four quickly made a habit of sleeping curled up next to me at night. Note that this happened even though I was too young to be the one who fed him. We were inseparable. When I was older and walking down the gravel driveway home after school he’d pop out at me from behind trees in that playful arc-jump that cats do.

One night he didn’t come home. This never happened. I was about 9 years old. I called for him every night and we looked for him for several days and alerted all the neighbors. As the days piled up, I kept calling for him with my child-like assurance that he would return. A family vacation took us out-of-town.

Then, three weeks after he disappeared, a call came from a neighbor. A neighbor had found my cat! He had been caught in the woods on a prickly bush (by his collar) the whole time. He wasn’t even that far away, we just couldn’t hear him. No food, no drink for weeks, but he was still alive. Somehow surviving on dewdrops and the occasional passing insect?

He was emaciated and had to have a graft on his neck where skin had been worn away as he tried to unhook his collar from the bush. That was heartbreaking, and yet darned if he didn’t recover quickly and live more than a dozen more healthy years with us!

I don’t think we are limited to just one feline soul mate. I suspect that each time we allow a new cat to pick us (assuming we feel quite drawn to them too), they end up being a soul mate. Animals have a sense of who they belong with—follow their lead and you’ll be glad you did.